Click here for car parking  information and here for maps and directions.

Regular high quality concerts take place in the hall, mostly on Saturday evenings but sometimes other nights. We like to feature a range of musical styles, such as folk, blues, singer-songwriters, jazz, Americana/ alt.country, etc. There is a licensed bar and all concerts start at 8pm unless stated (doors 7.30).

COVID (Dec 2021)
We ask that people do not attend events if they have any potential symptoms, however mild. We also suggest people bring a coat, as we open more windows than normal, to increase natural ventilation. From Saturday 11 December, we are also asking people:

(1) To be able to show evidence, if asked, of double vaccination (either via the NHS App or a vaccination card); or a Lateral Flow Test taken the same day (via the NHS app, an email from NHS or a photo on your phone, confirming a negative test).

(2) To wear a face covering on entry and until seated (you may choose to continue to wear one during the performance).

Tickets are available online at wegottickets.com. Click the logo to see a full list of concerts currently available to book or click here for a listing in PDF format. Our next show: 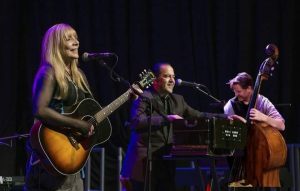 Ticket link here.
Charlie Dore is one of the UK’s most respected singer songwriters. In an unusually diverse career her songs have won two Ascap awards, an Ivor Novello nomination, both the Overall Grand and the Folk Prize from the International Acoustic Music Awards. Her 2017 album Dark Matter won both Album of the Year and Best Lyrics from the US Indie Acoustic Project, while this year her new album, Like Animals has just won her 2021’s FATEA Female Artist of the Year award. She has also worked as an actress in theatre, film, (the award-winning Ploughman’s Lunch, playing opposite Jonathan Pryce) TV, Radio with Eric Idle and co-founded London Comedy Impro venue, The Hurricane Club, performing alongside many comedy icons including Bill Bailey, Stuart Lee and Robin Williams.

While her own albums favour her more eclectic/roots leanings, she is one of a handful of UK writers to achieve success across many genres, defined by the range of artists to have recorded her songs, including Tina Turner, George Harrison, Celine Dion, Lisa Stansfield, Paul Carrack, Ricky Ross and Jimmy Nail, notching up along the way a UK No 1, a US No 4 and Top 10 hits in Italy, Germany and France. She has also composed for three BBC drama series and two films. Her own hit, Pilot of the Airwaves is still on Radio 2’s core playlist and a worldwide radio favourite.

Charlie continues writing for and with other artists and also enjoys mentoring emerging songwriters when she’s not recording or touring with her own band. She is currently writing ‘Background Noise’, as a series of essays about her life offstage.

For this show, Charlie will be joined by Steeleye Span’s multi instrumentalist, Julian Littman and, in a just-announced change, by the much in-demand Gareth Huw Davies, who adds 5 string double bass, cello and vocals to the mix.

Need somewhere to stay? There are several B&Bs and hotels nearby – the nearest are on this link. There are also many self-catering holiday cottages, although these will often require a minimum 2-night stay (link here). For more village options (caravan sites, youth hostels etc), click here.

A specification of the equipment used for hall concerts can be found on this  link (this may be subject to change, so please check if needed). We also have available a full-size digital Yamaha Clavinova piano keyboard (model CLP-411 – see technical specification here).

“I created my dream, a small studio to record what’s in my head. A work in slow progress! Add my masochistic pleasure in P.A. work and desire to produce pure sound and you have Mixonthehill.”

Contact Alan if you have something you want to record (or need PA!) at very reasonable rates.

This page maintained by Dave Littlehales and Martin Snodin