For more information about the Striders, who usually meet on a Sunday morning, please contact Paul Binfield on 310146

Sunday 6th November 2011 saw 1500 plus competitors running the famous Dovedale Dash.  This year, Dot Griffin, Sue and Dave Lovatt, Marie, Patrick and Jamie McIlroy represented the Alstonefield Striders and for once the weather was kind, the skies were blue which all added to some fine runs from our team. 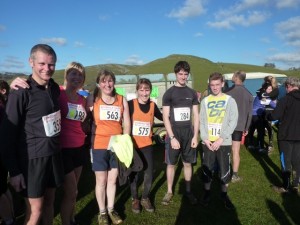 Further pictures can be seen on the Dovedale Dash web site.

It is now over two and a half years since the Alstonefield Striders were formed.  The Striders go from strength to strength, with members entering many running events both locally and nationally.  The Dovedale Dash is fast approaching  (Sunday 6th November 2011) and Sue and Dave Lovatt, Dot Griffin and Yvonne Pope from Butterton are pounding the fields in preparation for this event.

We always welcome new members.  You do not need to have been running before, just come along and join our small friendly group.  All ages welcome.  We meet 9.00am Sundays on Alstonefield Playing Field, 11.00am if AAW in Church.

1500 runners competed in the Dovedale Dash on 7th November which saw some incredible runs from members of the Alstonefield Striders.  Dot Griffin, Sue Lovatt, Dave Lovatt, Kieran Shuttlewood and Sue Purvis all battled through the mud and the ‘cold’ Dove to produce top class performances.  Well done to you all.

September 19th saw Dot Griffin running the Ashbourne half marathon, probably one of the toughest runs in the country.

Not only did she run this course, she also raised £1,250 for the chemotherapy suite at the Royal Derby Hospital where her late father-in law (Ken Griffin) received treatment for prostrate cancer.

Well done Dot and a big thank you to all those who sponsored her.

Great runs from the Striders, venue Parwich – Tuesday 3rd August 2010.  Peter Linley again ran a tremendous race,  just being edged into second place.  Well Done Peter – keep up the good work.  We had great runs in the senior race from Sue Purvis, Dot Griffin, Tony Gibbon, running against many seasoned club runners – Well Done to them, Bring on the Ashbourne half marathon and the Dovedale Dash.

Sue Lovatt accepted quite a challenge on Sunday 20th June, when she took part in the hugely popular, Race for Life charity race, in Tatton Park, near Knutsford.

Making a first-time entry, away from the usual comforting company of fellow Striders, Sue set herself the target of completing the 10 kilometre race within an hour – 10k, for those more used to old money, equals no less than 6.25 miles. Positioning herself up on the start line, to ensure a trouble-free get away in the vanguard of the mammoth entry – she was wearing an 800+ number! – Sue set herself a steady pace from the off, at 10.30am. The undulating course, around the lovely estate land of Tatton Park, soon saw the field well strung out, but the Alstonefield runner kept the leaders in sight, to pass beneath the finishing banner in exactly 57min 45secs, thus easily achieving her aim. When we learn that 3,471 folk took part (not all runners, some jogging, others walking) that was some achievement. Sue and husband David had garnered sponsorship in advance from friends and neighbours and Cancer Research UK will benefit too from this fine effort.

On a beautiful sunny day 12 Striders ran along the Manifold Trail after first tackling Larkstone Lane to finally finish at Hulme End.  For their hard earned efforts, they contributed £64.00 towards Sports Relief.  Keep up the good work and Happy First Anniversary to all you Striders!

Alstonefield Striders recently celebrated a successful first season of running by holding a post run brunch.  The brunch was to thank Paul and Maureen Binfield for all their time and effort they have given.  Their dedication to the club has been outstanding.  The year has seen many goal posts achieved, from fell races to 1/2 marathons and most recently a huge contingency running the Dovedale dash.
Thankyou to all who made the morning a success.

For your diaries – 1st November 2009 – Dovedale Dash time – race time 11.00am.  Fun Run 10.00am.  Alstonefield Striders are entering a strong side into the main race (at least 15 runners), and a few of the youngsters are entering the Fun Run.  Good Luck to all and congratulations for achieving all this in just 7 months.

We are always looking for new members to join our friendly group.  All ages and abilities very welcome.

After a wonderful evening celebrating Hilda and Peter Leason’s Golden Wedding Anniversary, it was all systems go for the Alstonefield Striders on the morning of Sunday 13th September 2009.

Tara Allen, Dot Griffin and Paul Binfield entered the half marathon and did themselves proud.  Jamie and Patrick Mcilroy and Peter and Thomas Linley ran the fun run, again great runs from these four.  A special mention to Jamie who shattered the 200 plus runners to finish in 1st place.

Considering the Striders were only formed just over 6 months ago, this is a wonderful achievement – Well Done to you all.  Bring on the Dovedale Dash!

Please note we are now starting at 9.00am on Sundays through the summer months, 11.00am if there is a church service.  We are also doing additional runs in the evening during the week – all ages and abilities welcome.

Distance markers have been placed around the playing fields, four times round the outer edge of the field and you have completed one mile plus a little extra – a good way to monitor your progress.  So please use them for your power walking, jogging, running and you will soon reap the benefit.  A note for your diaries:  Parwich Run 4th August, Ashbourne half marathon 13th September and the Dovedale Dash in November.

We are just 11 months into the formation of Alstonefield Striders.  In that time we have completed various runs including the Ashbourne Half Marathon and the Dovedale Dash.  Saturday 6th February 2010 saw even more success when Thomas Linley from Alstonefield, Izzie from Parwich, Oliver from Thorpe and Benjo from Stanshope ran in the County Cross Championships and what runs they had, all of them giving 110% – their determination was certainly something to witness!  What great prospects this group have (watch this space in the near future). This page is maintained by Maureen Binfield